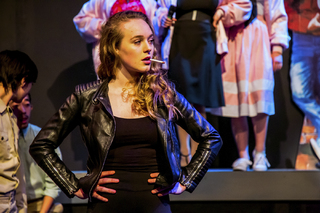 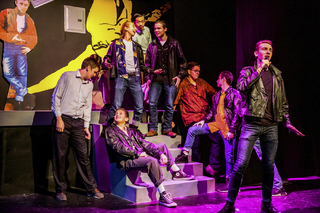 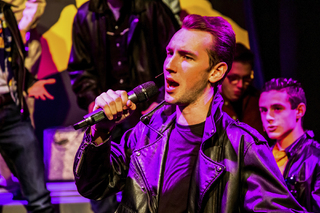 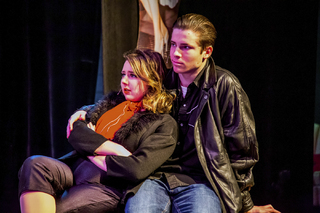 "Grease" was the word at The Seven Hills School, and for those who haven't heard, it had groove and meaning!

Written by Jim Jacobs and Warren Casey, "Grease" originally premiered as a raunchy spectacle in Chicago in 1971, and was cleaned up as it made its way off-Broadway in 1972 for an eight-year run. The plot follows the teenage antics of students at Rydell High School in 1959, with a focus on the romance between greaser Danny Zuko and wholesome new girl Sandy Dumbrowski, as both try to figure out if they're willing to change who they are to keep the other's love.

Seven Hills' production of "Grease" exhibited a plethora of multitalented actors and actresses who danced, sang, bickered, and laughed with an unwavering energy. Standouts were the two leads of the show: Jake Groom as the tough guy with a heart, Danny, and Hannah Kelly as the good girl with a sharp side, Sandy. The pair had a superb chemistry, and this, combined with their impressive vocal talents, made for memorable numbers such as "Summer Nights" and "All Choked Up." Another notable performance was Hannah Levin as Betty Rizzo. Maintaining a convincing tough-as-nails exterior for a majority of the show, Levin also revealed her character's sensitivity with her touching performance of "There Are Worse Things I Could Do."

Stephen Walsh as Roger, a member of Danny's gang with a penchant for mooning, was marvelous. His hysterical enthusiasm while singing, coupled with his hilarious shenanigans on stage, such as grandly popping out of a car during a relatively solemn number, were causes for much laughter. Courtney Hammonds as the constantly hungry Jan also elicited many chuckles with her ever-present snacks, and Miranda Qiao, as the overly-peppy Patty Simcox, never lost her nerdy gusto in her interactions with the "cool kids". Although it was occasionally difficult to hear some of the performers' lines, it was clear that everyone in the show devoted much time to practicing their lines and choreography, as the cast seldom missed a line or dance move, even during the more complex, crowded scenes.

The technical aspects of "Grease" deserve to be lauded. The props crew did an excellent job of finding props true to the era, including an antique radio, a rotary dial phone, and a pair of rhinestone-bedecked cat-eye glasses. Perhaps the most memorable prop was the rusty but cherished car, Greased Lightnin', on which actors were even able to jump and dance. The sound crew also added much to the vintage feel of the show, with a campy horror movie dialogue during a drive-in scene and oldies music that would coincide with the mood on stage, like a hardcore rock ballad following a fight. Finally, stage management and crew did a wonderful job of keeping the show running smoothly. Set pieces were quickly moved on and off stage between scenes, transforming the set from a cafeteria to a bedroom in a matter of seconds, and cues were on point.

We all live lives of illusion that are wrapped up in trouble and laced with confusion, but Seven Hills' delightful production of "Grease" did much to serve as a reminder that with hardships come friends to make things a little more bearable.

Colorful, vivacious, shimmering - American culture is epitomized in "Grease," a musical about Rydell High School's anxious and confused student body set in the ultra-conformist 1950's. The Seven Hills black box provided an intimate look into the lives of these characters as they navigate one of the trickiest times of life: high school.

This 1971 musical follows the rocky love story between Danny Zuko and Sandy Dumbrowski, two teenagers who meet over the summer and fall in love - only to realize that their relationship fares much better in private than it does when in view of their friends. Danny's friends, the Burger Palace Boys, and Sandy's friends, the Pink Ladies, also learn valuable life lessons while facing troubles such as teen pregnancy, substance abuse, and peer pressure.

Though the show tackles adult themes, it is important to remember that it tells the story of children. Hannah Levin, in her role as Betty Rizzo, was a spectacular reminder of this. Her character is cunning and mean, but in touching musical numbers (such as "There Are Worse Things I Could Do"), the depth of her character was revealed, and it was clear that more drove her actions than disdain.

The whole cast was dynamic and engaging, particularly Danny (Jake Groom) and Sandy (Hannah Kelly) whose wonderful vocals carried many of the musical's iconic songs. Stephen Walsh's Roger was hilarious and a perfect match to Courtney Hammonds' Jan whose sass brightened every scene she was in. The ensemble was energetic and kept the show fast-paced.

Orchestration drives all good musicals, and in "Grease," the sound was spot-on. Cues were called perfectly by stage management and mixed brilliantly by the sound crew. Spoken recordings that ranged from radio reports to movie dialogue were immersive and fantastically composed. Although the microphone volumes were occasionally uneven, it was merely a blip in an otherwise stunning performance.

The props, designed and compiled by Maddy Kennebeck, were excellent and added small touches of realism to the show. The cigarettes were extremely realistic, and Kenickie's bright red "greased lightning" was impressively operative.

The 1950's often seem surreal to those who didn't live through them. They seem distant and glossy, pretty and oppressive, all in one. Seven Hills' production of "Grease" was a stark reminder that the people of the past were not as different as we imagine, and that teenagers have always been as clumsy, as awkward, and as innocent as they are today.

Portraying a classic rock-and-roll musical to the current generation can be a daunting task, yet the Seven Hills Upper School's performance of "Grease!" combined the character of the past with the technology of the present, thus creating a perfect balance of freshness and authenticity.

When "Grease" was first performed in Chicago, it was a record-breaking hit. Since the original version toured, the musical has been rewritten and recomposed a series of times and adapted to one of the cinema's most successful films. Despite the revisions, "Grease" has always followed an innocent girl-next-door stereotype, Sandy Dumbrowski, as she navigates enrolling in a new school. Her character is tested both romantically and through her new-found friendships, eventually causing her ultimate transformation as she embraces her inner strength and adapts to the world around her.

Seven Hills exemplified commitment and attention to detail as they painted the perfect 1960's atmosphere in "Grease." It was evident that the cast and crew dedicated a great deal of energy into embracing the unique qualities of the time. Each character, most notably the Burger Palace Boys, attempted accents to elevate his or her characterization. Roger's (Stephan Walsh) squeaks and scoffs not only established the setting but also introduced an additional layer of comedic relief. Additionally, each character was equipped with a water-vapor-based e-cigarette. Watching Hannah Kelly's performance as Sandy as she attempted to smoke a cigarette for the first time was not only intriguing but realistic due to this development. Through every scene change, the soundtrack, mixed by Gabby Kominar and Ari Gleich, kept the grunge vibe consistent and grounded; the time-appropriate music played made every moment, even if no one was on stage, feel part of the story. Finally, the decision to use handheld microphones during certain scenes added to the credibility of the performance. Although proven slightly distracting during dance numbers, Sandy (Hannah Kelly) and Danny Zuko (Jake Groom) morphed into rock stars as they belted into the mics. The combination of these factors allowed for the production of "Grease" to transform the theatrical experience.

Overall, the Seven Hills Upper School remained attached to the integrity of the original version of "Grease" but did not shy away from adding their own creative interpretations into the show, thus elevating the production to a sophisticated, yet accurate finale.

“The leads of the show were completely dedicated to the characters. Hannah Levin breathed life into Betty Rizzo, astonishing the crowd with her deeply felt and sincere rendition of ‘There Are Worse Things I Could Do.’ Hannah Kelly and Jake Groom, as Sandy and Danny, knocked the audience's collective socks off with their beautiful harmonies in ‘Summer Nights.’”

“With the unique decision to perform the musical in a black box space came many technical and dramatic challenges. The cast and crew handled these hurdles dexterously through creative choreography and larger-than-life acting. Large ensemble numbers such as ‘Summer Nights’ and ‘Greased Lightnin’’ brought energy and toe-tapping rhythm to this colorful production. Anchored by strong lead performers and strong vocalists, Seven Hills School provided an entertaining experience brimming with gut-busting and tear-jerking moments alike.”

“The actress that played Sandy, Hannah Kelly, played her character very well. She acted very sweet and innocent. Her timid characteristics were emphasized, allowing her to become the perfect representation of Sandy. In all of her songs, especially ‘Summer Nights,’ she was able to belt out lines with much ease. Her voice, like her character, was soft and graceful.”

“The most innovation within Seven Hills School's production of ‘Grease’ came from the complex technical elements. A creative assortment of props, most notably the Burger Palace Boys' car, supplemented a creative, multi-purposed set design. The sound crew's inclusion of realistic '50's song and radio clips aided in difficult scene changes and strengthened the undercurrent of nostalgia and realism.”

“Comedic Burger Palace Boy Roger (Stephen Walsh) caused laughter in any scene through his movements and voice. Specifically, he was extra entertaining in Danny Zuko's (Jake Groom) solo song "Alone at a Drive-In Movie" by popping out of the car to sing a couple of ‘oo’s.’”

“The props used in the show were also very well-done and enhanced various scenes. For example, when the cast performed the number ‘Greased Lightnin’’ the gigantic car that they drove around the stage made one feel as if one was actually in an auto garage.”

“Jake Groom excelled as bad boy Danny Zuko. His stage presence during the track meet scene and overall performance during ‘Alone at a Drive-In Movie’ were thoroughly amusing. Both Hannah Kelly as Sandy and Groom a Zuko brought their characters to life and added to the lively nature of the production.”

These reviews also appeared on the Cincinnati Enquirer's website.