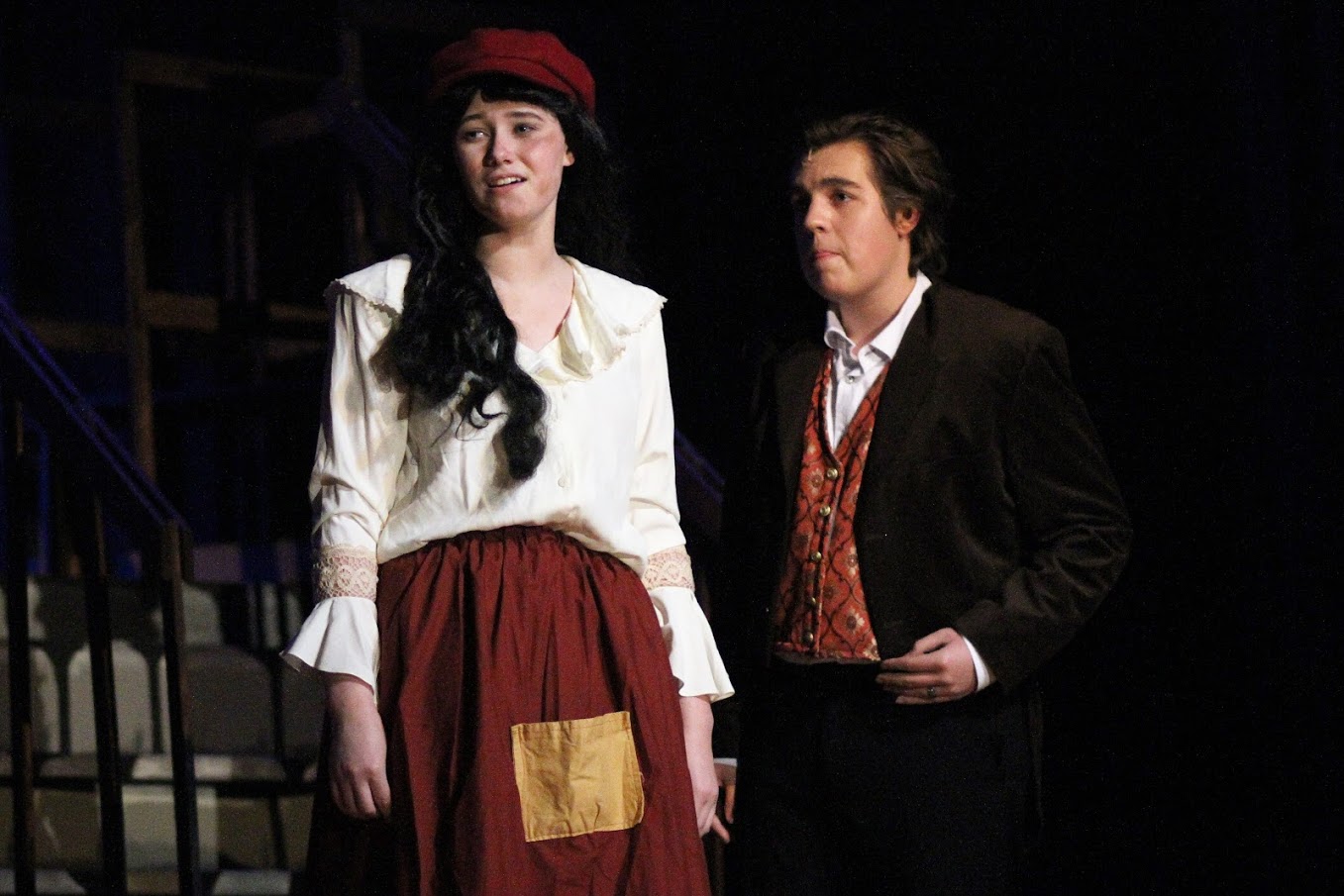 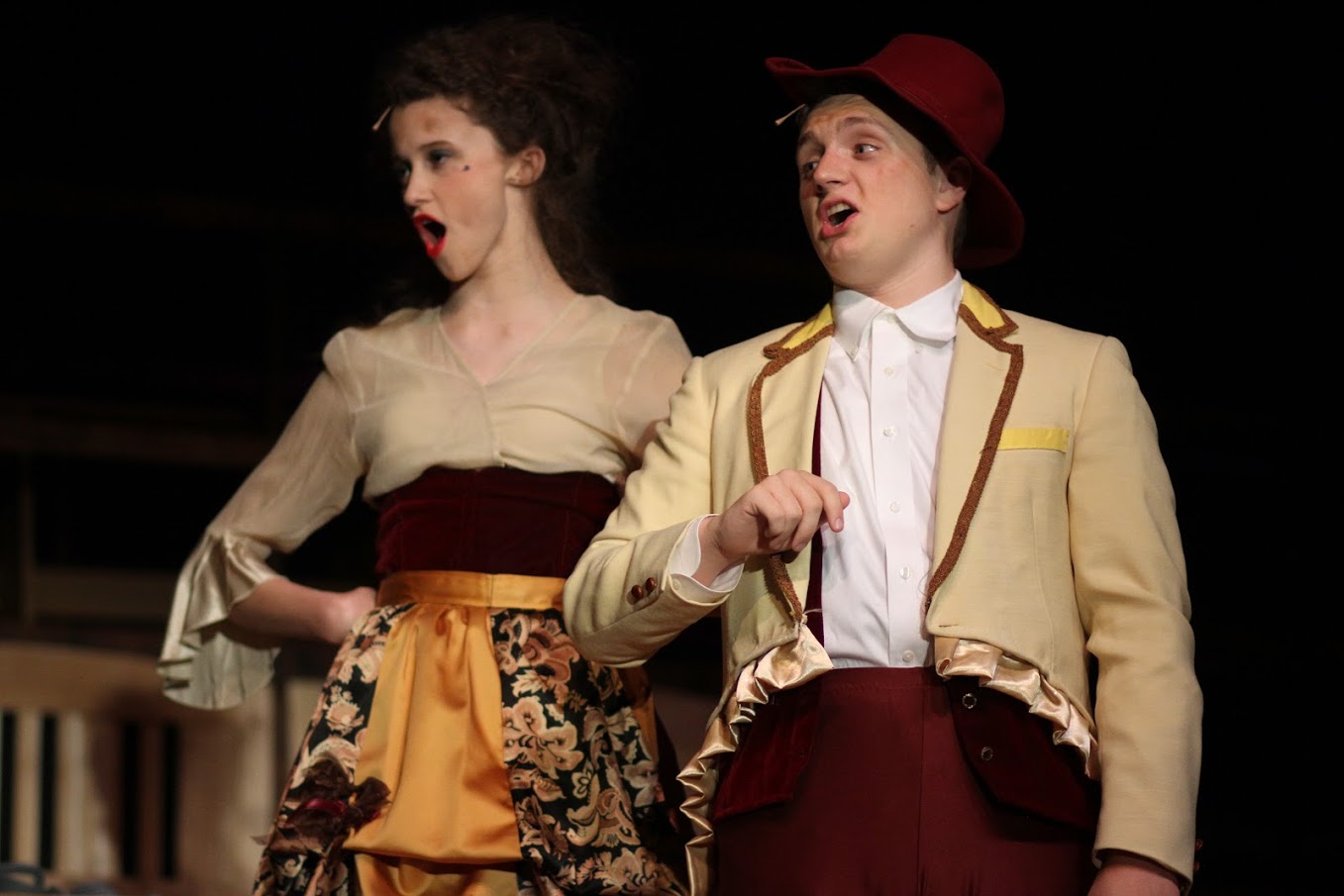 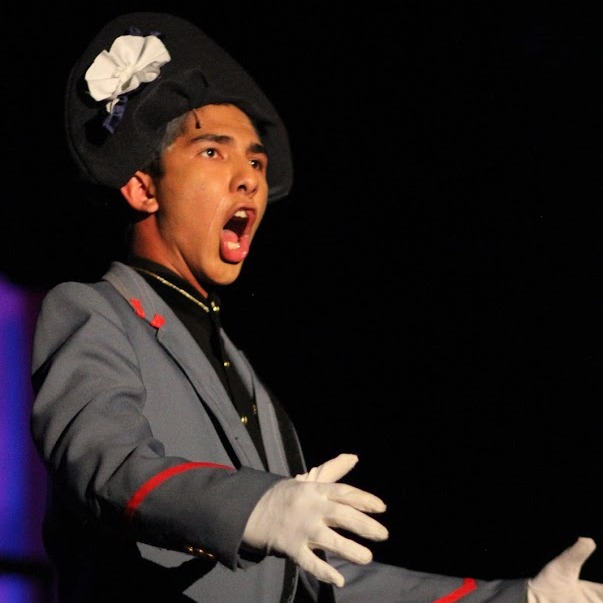 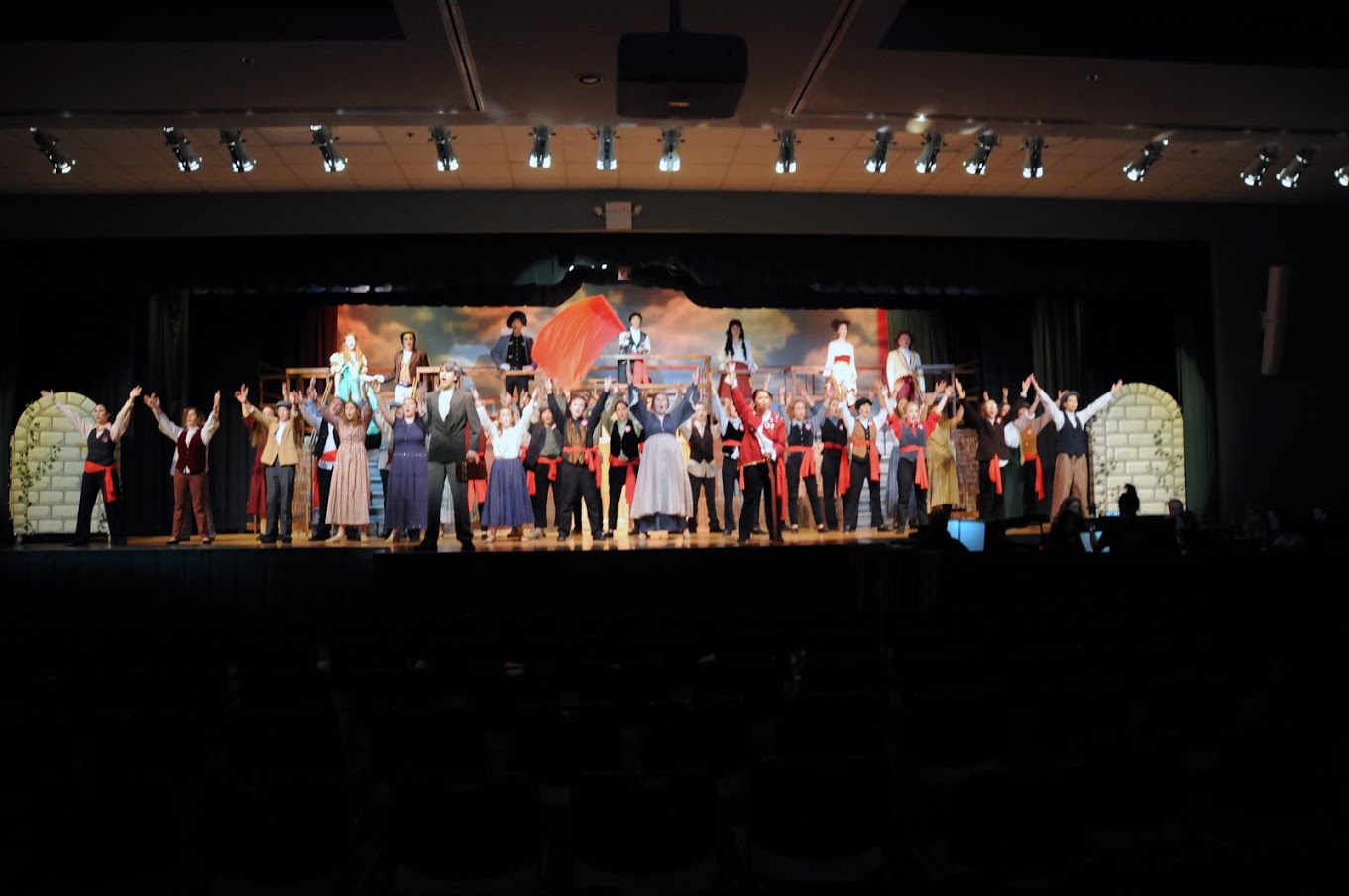 A heartwarming story of conflict, love, strength, and compassion was beautifully brought together by the band of brothers and sisters at Ursuline Academy in their production of "Les Misérables."

The musical, based on the 1862 novel by Victor Hugo, first appeared on stage in 1980 in Paris with music by Claude-Michel Schönberg and lyrics by Alain Boublil and Jean-Marc Natel. Eventually, in 1985, the English version of the musical was adapted and became a top hit on broadway stages. This well-known story, set in France during the 19th century, follows Jean Valjean as he searches for redemption after being imprisoned for nineteen years for a small crime he committed.

Ursuline Academy's "Les Misérables" phenomenally took on this difficult and demanding show and molded it to fit their cast, crew, and space perfectly. Actors and actresses maintained high energy throughout the show, eased through tricky harmonies, and remained a coherent cast. Cast members were complemented by an amazing multipurpose set, wonderful lighting, and quick stage managers and run crew.

Jean Valjean, played by Michael Williams, and Javert, played by Skye Haruyama were two standout performances. Michael Williams wowed with his broad range, quality vocals, and heavy emotions as he outstandingly portrayed Jean Valjean. Skye Haruyama stunned with his powerful vibrato and voice as he captured every complex emotion of his character, Javert.

Benjamin Crane, who played Marius, and Leah Gray, who played Eponine, among other notable characters, displayed strong vocals and maintained high energy throughout the show. Others, such as Adrienne Kelly and Will Sapp, brought comedic relief to the show with their irreverently hilarious characters, Madame Thenardier and Thenardier. A strong and versatile ensemble rounded out the show with appealing harmonies, precise movements, and solid character development and connection.

The setting of 19th century France was truly brought to life within the set. The functional set displayed everything from a church to a factory, a café, a barricade and much more. It was complete with multiple levels and even a trap door that added to the plot of the show. The set was wonderfully accessorized with props that gave a touch of authenticity to the setting and was methodically lit up with the wonderful lighting designs for the show. Costumes accurately fit the time period and setting and gave each character a distinct personality. Stage management and stage crew executed scene changes cleanly and quickly. Although some lyrics were lost, each character came through powerfully as assisted by the sound crew.

This powerful show was brought to life in Ursuline Academy's exceptional production of "Les Misérables."

A story of struggle, of love, of passion and justice. A story of freedom and perseverance, of desperation and deceit. No other production portrays these themes as beautifully as "Les Misérables.' Ursuline Academy artfully examined the nature of human existence in this brilliant Claude-Michel Schönberg and Alain Boublil musical, featuring a wide array of talented vocalists, impressive choreography numbers, and an intricate set.

The Broadway classic, "Les Misérables," is set in nineteenth century France and tells the story of former prisoner. Jean Valjean; a poor peasant woman, Fantine; and her child, Cosette. After Fantine dies, Cosette is taken care of by Valjean and they run from Valjean's parole officer, Javert. Time passes, and soon, a revolution is imminent. Cosette's peers, such as childhood foe Eponine and the love of her life, Marius, join in the fight against tyranny, stationing themselves at the barricades.

Difficult in both its epic musical numbers and its demanding stage presence, this production is also famous for being incredibly long. However, Ursuline Academy did very well with its rendition of "Les Misérables," executing it with grace. Their performance was also notable for its smooth and quick transitions from scene to scene, helping to increase the pace and keep the show from becoming stagnant.

One of the standout vocalists of the show was Skye Haruyama in his role as Javert. Starting in the "Prologue," Haruyama was strong and was able to maintain this impressive performance throughout. During his solo number in the second act, "Javert's Suicide," he actually jumped off the set's bridge, displaying courage for the sake of his character while also keeping his vocals consistent and steady in the scene.

Leah Gray was also notable in her role as Eponine, wearing her heart on her sleeve during her multiple solo numbers. Her vocals in "On My Own" were especially impressive. The ensemble group during "Lovely Ladies" also had a great stage presence and their choreography was perfectly synchronized.

Les Misérables is a very technically challenging show, but Ursuline Academy met those challenges head on. The set was made to look like the dock of a ship, and multiple different set pieces were moved on and off over the course of the show. One of the most notable set pieces was the barricade, which was constructed of multiple different materials but came together as one perfect, defining piece of the scene. The lighting, designed by Leah Baumgartner, was also notable, accenting each moment with emotion.

Ursuline Academy's rendition of the classic musical "Les Misérables" was heartfelt, and the amount of work put into it by the cast and crew was evident. The vocal talents of the cast, combined with the multiple technical elements involved, ended up coming together to create a show deserving of the standing ovation it received.

As Ursuline Academy took on the classic story of love, courage, and sacrifice that is "Les Miserables," beauty surrounded the theater in every way possible. Strength struck the stage as the curtain opened, revealing a portal to France for the night.

Based on the awe-inspiring book by Victor Hugo and first performed in 1985, the spellbinding classic harbors the life of Jean Valjean, a man sentenced to 19 years of labor for stealing a loaf of bread. As hatred begins to take over his world, the adoption of young orphan Cosette begins to fill his life with love once more. Additionally, the story encompasses the maniacal and moronic behaviors of the Thenardiers, a final confrontation between Jean Valjean and police inspector Javert, and the fulfillment of dreams forevermore.

The cast and crew of "Les Miserables" exceptionally incorporated the amount of consistent energy and power the show required. Each and every cast members' investment in their character contributed to the authenticity and theatrical stamina that was performed through the entirety of the production. Scene transitions were exceedingly smooth and potent, enhancing the intensity of the plot and displaying the undying dedication of the cast and crew.

An extraordinarily notable performance was that of Michael Williams, playing the role of Jean Valjean. His exceptional vocal talents and abilities enhanced the performance significantly on an emotional level. He truly embodied the courage and bravery that is Jean Valjean. Lead actress Leah Gray created sensational character choices in her role of Eponine, as she never failed to ignite the touching and emotive aspects of the production.

Remarkable performances also include those of Adrienne Kelly and Will Sapp who added the perfect dash of humor and amusement to the production in their roles of Madame Thenardier and Thenardier. Their melodious voices blended impeccably, while still adding the comedic twists to their singing voices that demanded attention in every scene. The vocal abilities of Mary Wilkins, playing the role of Mother Abbess, created an essence of hope and beauty that is held within the story of "Les Miserables."

The technical aspects of the production are what anchored the power and effectiveness that surrounded each scene. It was extremely evident that the lighting cues came from such thoughtfulness and intricacy, as colored lighting was used to reflect the mood through the production's entirety. Lead by crew heads Leah Baumgartner, Julia Guenther, and Avery Mathis, the lighting crew framed each scene beautifully. The sound in the production was particularly noteworthy as well, as the voices of large ensembles came together as one magnificent sound.

Ursuline Academy's production was simply beautiful and captured the true essence of love and courage with every word sung of the lovely classic.

“Michael Williams's portrayal of the runaway convict, Jean Valjean, was truly sublime. He kept impressive control of his vocals and vibrato, transitioning from a higher register and backed down with ease. Williams's vocals, paired with his never breaking and distinct acting, made for a lasting impression. Kendra Burgei's Cosette complimented Williams and the rest of the cast nicely.”

“Ursuline Academy utilized their unique stage and space limitations with expertise. Smooth and seamless scene changes served to impress and kept the momentum of this complex show. Thematic consistency of the colors of the French flag in lighting and in the pins of the cast added to the overall experience.”

“Leah Gray, who played Eponine; Kendra Burgei, who played Cosette; and Annie Farkas, who played Fantine, acted as three pivotal women in the show, each providing strong performances in singing and acting. Of course, it is impossible to forget the hilarious duo of Thenardier and Madame Thenardier, played by Will Sapp and Adrienne Kelly.”

“The hard work of the crew allowed the actors to succeed. The costume crew's carefully crafted designs produced historically accurate pieces. The makeup crew made each character appear uniquely. The 24601 tattoo on Valjean's chest added drama to the scene when he opens his shirt. Madame Thenardier's teased up hair and hag-like makeup allowed her appearance to reflect the grimness of her character. The utilization of color-changing lights against the backdrop allowed the scenery to change with the mood. The texture and layers amongst the set pieces used to create the barricade added to the themes of Act II effectively.”

“Will Sapp and Adrienne Kelly as Thenardier and Madame Thenardier respectively, had incredible onstage chemistry. Their evident comedic prowess brought laughter and hilarity to an otherwise dramatic show. Mary Wilkins as Mother Abbess stood out in her role through her angelic vocals that sweetly captured her character. The ensemble, as a whole, kept the energy up throughout the entire production and were obviously dedicated to their characters so as to add to the emotion and power of the show.”

“The detailed costumes by Johnna Childs, Grace Ratkey, and Megan Thornton were period-appropriate. Most notable was Cosette's dress—a green gown and hoop skirt. Her dress underscored the difference in social class between Cosette and the peasants. Lighting by Leah Baumgartner, Julia Guenther, and Avery Mathis was another successful element. Red lights were used to accentuate especially dramatic moments. The lighting was a particularly effective way to set the mood of the musical.”

“Michael Williams took on the daunting role of Jean Valjean and was absolutely stunning in his performance. Williams' melodious voice rang out passionately onstage, and his excellent vocal range enabled him to truly belt in songs such as ‘One Day More’ and ‘Bring Him Home.’ Williams' expert voice control and portrayal of emotional depth allowed him to deliver a spectacular performance.”